26.66 billion devices - this is an approximate scale of the worldwide IoT network. And according to the same source, the numbers are expected to grow more than twice by 2025. This is, obviously, great news for startuppers and companies specializing in the custom IoT solutions development. And this is what motivated us to create this overview of the IoT as a concept, with all its major protocols and tech aspects.

What is the Internet of Things?

The Internet of Things is a global system of interconnected within certain network devices that interact with each other by the M2M principle, i.e., without any human participation. The goal of this interconnectivity is to collect, structurize, and provide centralized processing for all data that passes through the devices.

Along with AI, IoT has become one of the leading directions in the global growth of IT. Thus, in 2008, IPSO Alliance created a union of companies that support the development of IoT-related technologies.

The concept has a wide field of application in all aspects of human endeavor: manufacturing, logistics, agricultural sector, healthcare, security systems, and many others.

There are four levels of the basic IoT architecture:

There are multiple commonly used types of involved technologies and data transferring protocols here. Let’s take a look at the major ones.

Wi-Fi is a set of wireless connection standards classified as IEEE 802.11, which perform in 2.4 GHz and 5 GHz frequencies and provide the length of transferring data packages up to 50 meters (where there are no obstacles) and 150 meters (in the environments without obstacles). This prominent technology can be used to create a wireless local data transferring network based on TCP/IP protocols.

The downside of Wi-Fi, though, is high energy expense on connected devices. That’s why a pair of separate specifications - IEEE 802.11s (defines rules for building mesh networks) and IEEE 802.11ah (the HaLow standard) - were created to provide lower energy consumption opportunities.

ZigBee is among the widely used tech solutions for establishing low energy consumption wireless networks for the IoT that performs in the 2.4 GHz frequency. It supports the ‘mesh’ network topology, dormant and mobile nodes, as well as nodes that enable retransmitting and self-recovering algorithms. 250 kB/s is the maximum transmission capacity of such a network (with the usable speed of about 30-40 kB/s between neighboring nodes and 5-25 kB/s during retransmission). Although, ZigBee doesn’t support an IP protocol, which makes the integration of ZigBee-based networks with third-party applications complicated.

Z-Wave is yet another popular wireless tech solution. Here, a network is based on the mesh topology and consumes minimized energy rates. The transmission spectrum here ranges between 865-922 MHz with the speed of data package transfer ranging between 9.6 - 100 kB/s. The maximum length of the transmission is 40-120 meters. Usually, this tech is used during the Smart Home organization.

Z-Wave is compatible with numerous devices (in particular, sensors and actuators). It is managed remotely via a remote controller or smart gadget (PC or smartphone connected to the Internet). It connects with the web through the IP protocol. The main feature of Z-Wave is that it falls under the DIY format, i.e., you can install and configure the system single-handedly.

The LoRaWAN specification is a low-power wide-area network protocol (LPWA) which is intended for wireless interconnection of devices and supports bidirectional communication, end-to-end security, mobility, and localization services. The LoRaWAN architecture is deployed based on the star topology, where gateways retransmit messages between end devices and a central server.

Gateways are connected to the network server via a standard IP connection and work as a transparent bridge, simply transforming RF packages into IP packages and vice versa. Notice that LoRaWAN can provide the speed of only up to 5 kB/s. Nevertheless, it still does its work pretty fast.

It’s considered that the cellular connection doesn’t fit most IoT implementations, as it consumes too much energy and expensive in use. Nevertheless, there is one certain advantage - practically thorough coverage of whole countries. It is also exclusively compatible with devices that work based on a direct power source, can transmit voluminous data packages, and are situated in densely populated areas.

There are two typical cellular connection techs employed in IoT solutions: GPRS (General Packet Radio Service) and 3G (third-generation wireless connection). The first concept provides a theoretical maximum of data transfer speed of 171.2 kB/s in the 900/1800 or 850/1900 MHz ranges depending on the location. The latter is at least 144 kB/s fast (for immobile objects it can reach up to 2048 kB/s) in the range of 1920-1935/2110-2125 MHz (uplink/downlink).

Bluetooth is a family of wireless standards intended for building Smart Home-type networks. It is an energy-efficient technology that employs high-frequency waves in the 2402-2480 MHz range and provides bandwidth capacity up to 3 Mbit/s. Bluetooth was recognized as the best choice for sound transferring on numerous occasions. Because this tech doesn’t support direct web connection, to use solutions based on it, you will need an access gateway.

Among the downsides here is a relatively moderate length of performance (about 100 meters). That’s why this tech is mostly used in Smart Home systems where there are not so many physical obstacles. And further system scaling will require the installation of more gateways.

***
Now, let’s have a look at protocols that IoT devices use to share data with each other. There are quite many options here, but we’ll consider only the most common ones.

MQTT or Message Queue Telemetry Transport is a simple, compact, open asynchronous data transmission protocol for highly-distant locations. It supports several Quality of Service (QoS) levels. All of that allows its involvement in M2M systems (Machine-to-machine interaction) and the IIoT (the Industrial Internet of Things).

Notice that there is also a version of this protocol called MQTT-SN (MQTT for Sensor Networks), formerly known as MQTT-S, which is compatible with integratable wireless devices that don’t support TCP/IP networks, like ZigBee.

The HTTP defines data transmission rules on the application tier. It is used for establishing interaction by the Device-to-User scheme. Providing stable performance in the unstable work of the network, it, still, loads the system pretty significantly. That’s why in terms of the IoT, many prefer its lighter version - CoAP.

CoAP (Constrained Application Protocol) is an interpretation of HTTP for the Internet of Things. Similarly to its older brother, it employs a UDP protocol over the IP and doesn’t require servers to save current states. In order to transmit node data to servers, CoAP employs such requests as GET, PUT, HEAD, POST, DELETE, CONNECT.

It’s a good protocol for the establishment of interaction capacities between simple devices like low-power sensors and switches manageable online. Such tools feature limited resources (energy resources, memory volumes, and overall powers) and it’s important to involve similarly low-power technologies with them.

AMQP (Advanced Message Queuing Protocol) provides interaction capabilities between clients and brokers. It standardizes messages, allowing a wide range of different software and systems to work together no matter the internal structure. AMQP can be used in any situations where there’s a need in high-quality, secure message transmission between software and processes.

DDS (Data Distribution Service) is an interpretation of an HTML publishing template based on UDP. It’s used for sending and receiving data, events, and commands among end nodes. DDS has a highly-developed system of Quality of Service policies. Of all middleware standards, DDS is the only data-centric technology, i.e., it ‘knows the semantics’ of distributed data, unloading the software.

It features security over a transport level and doesn’t require the involvement of protocols like TLS/SSL or DTLS. The UDP multicast support (both for the ‘reliable’ and ‘best effort’ traffic) provides efficient data distribution even in the case of a large number of subscribers.

There are a few leading market players that provide cloud services for IoT solutions. Here’s a brief overview.

The AWS IoT platform lets one connect an indefinite number of IoT devices by the M2M principle and allows them to interact with numerous AWS services. It features end-to-end security (provided due to the TLS protocol), and reliable, prompt processing. It also supports autonomous interaction between devices even in the offline mode. AWS IoT Core is compatible with HTTP, MQTT, and WebSockets. 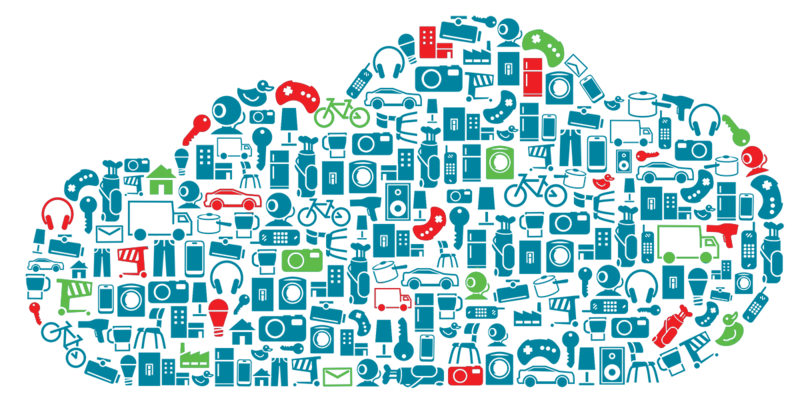 The device dispatcher is used for connecting new devices to the network and for monitoring of their state, while protocol bridges (of MQTT and HTTP) define the data transfer rules. You can choose from three options of software implementation: Infrastructure-As-a-Service, Platform-As-a-Service, and serverless computations.

Created by Watson and integrated with IBM Cloud, IBM Bluemix allows collecting data in real time. With visualization features, managing tools and systemizing data becomes utterly simple. Remote device management is realized through MQTT and HTTP. This product is perfect for building scalable solutions because, in terms of costs here, you only pay for the used server powers.

Alibaba IoT provides an immediate two-way connection between devices and cloud. The framework spawns its own data transmitting channels (via 2G, 3G, 4G, NB-IOT, MQTT, CoAP, and LoRa). Developers also get to use SDK, with the help of which, one can create silicon-based solutions with the increased accessibility level and extra connections.

This one’s a full package of tools integrated with the Azure framework, which can connect hundreds of thousands of devices situated all over the world, as well as analyze, store, and process data. This solution is most often used in business processes automation. Moreover, it’s adjusted to fit well scalability conditions and has profitable server power use tariffs. IoT Hub employs MQTT/MQTT over WebSockets, AMQP/AMQP over WebSockets, and HTTPS.

***
To top it all off, some less popular solutions of this kind include Cisco IoT Cloud Connect, SAP Cloud Platform, HPE IoT platform, ThingWorx, etc.

The finish line of our overview - a couple of renowned IoT apps examples.

A smart speaker Amazon Echo has already become a useful assistant in routine tasks for many homes in the USA, Canada, and Europe. It can read the news, your emails, and provides voice navigation through the available functionality. You can also connect it to your smart home framework and get centralized voice management opportunities.

One of the most renowned wearables out there, which tracks your physical state in real time. You can monitor all your daily physical activity, feasting, and sleeping trends.

The Bigbelly system was developed due to the globalization of the recycling and utilization of garbage. It helps to sort out your waste and monitors as your garbage bin fills up to the brim.

Recently, Philips has launched an intellectual system of medicines distribution based on the IoT. It can help patients get utterly precise medicine dosages by schedule, which is a great thing senior and disabled people can use.

One of the latest models of a smart locomotive by GE Evolution has become a revolutionary solution in the field of smart transportation. Featuring 2,500 sensors on board, tens of thousands of parameters are analyzed each second on this machine. It makes the autopilot of the train highly precise and provides as precise predicting features.

All in all, the Internet of Things concept is still in its active development stage and in the nearest future, this progressive field of IT will bring us many life-enhancing, world-renowned solutions. Meanwhile, at Applikey Solutions, we will consult you on the topic of your own IoT-based concept implementation and provide an expert team that will build it for you.