Google Flutter review: speed, effectiveness and performance. Is it really a breakthrough?

Cross-platform mobile app development is not a new concept. However, early ideas on how to unite a divided market weren’t all that successful, and the field has only recently become popular and effective. With big tech companies launching their own tools for cross-platform development, the biggest juggernaut of them all – Google – couldn’t stay away from the topic either. In 2017, at Google I/O Festival, the company started to promote its own solution – Flutter.

Flutter is a software development framework based on the Google Dart programming language. While it has not been around for a very long time, it has already gathered a rather large community (over 71,000 stars on GitHub). Furthermore, some of the apps developed with it has become a hit, from Google's own applications and all of the apps developed for Fuchsia OS to Alibaba apps, and even an application for Hamilton the Musical!

The first thing you need to make cross-platform development possible is to ensure that the end product feels native on every platform involved. Flutter is full of built-in components that can help you with creating that sense. With a massive list of libraries and such tools as Material Design and Cupertino widgets, there won’t ever be a need to use third-party solutions.

Google knows how to sell their products right. And we’re not just talking about the marketing: the overall support Flutter gets significantly helps the developers that use it. The amount of documentation, guides, and tutorials existing this early after its release is impressive. This makes the entry barrier really low for someone new to the framework.

The fact that Flutter is based on Google Dart, however, raises it a bit more. While it was created specifically for multi-platform app development, it has never been popular among software creators. Fortunately, it is rather similar to C#, Objective-C, Swift, Kotlin, Java, and other object-oriented programming languages. So, if you have any experience with those, learning Dart won’t be a problem for you.

In order to gauge how good of an option Flutter is, we need to compare it with other popular cross-platform development tools. Two other most well-known and well-regarded competitors in the field are React Native and Xamarin.

Xamarin is one of the oldest cross-platform development solutions. Created in 2011 and later purchased by Microsoft, this framework has gathered a rather large following and proven to be effective. It is worth noting that its success is heavily dependent on Visual Studio and some tools are hidden behind a paywall. However, you can provide full-cycle mobile app development even in Visual Studio Community edition. There are two options to choose from: Xamarin.Forms (better to use for building applications with the focus on UI) or Xamarin Native (for the apps with high-performance demands or interactions with native features).

React Native is a cross-platform tool developed by Facebook. The popularity of this framework can partially be explained by the fact that it employs JavaScript – one of the most popular programming languages for web development. To achieve similar user experience across platforms, React Native uses the so-called bridge to adapt each component to a separate platform. This has both pros (no chance that the element will break after an update) and cons (optimization would have to be performed for each platform separately).

So, let’s take a look at the pros and cons that each framework has over the others for developers and end-users.

Time is the most valuable resource. So, the first thing you need to consider before choosing the best framework for you is how fast and effective the development would be.
Flutter employs Google Dart for app development. As it is not as popular, it would take a lot of time for a new developer to adjust. In order to improve the effectiveness of the development, Flutter includes a hot reload feature. It allows the creators to test the changes they’ve made to the UI right away, helping to accelerate app development by several times. It makes Flutter a leader in terms of development speed at the moment.

React Native tries to keep up with Flutter in the race for being the fastest and the most effective framework. It is also equipped with hot reloading feature to make the development process that much easier. And JavaScript is among the most popular programming languages right now – there are a plethora of guides for it.

Xamarin has substantial time lag from the changes have been done upon to the actual result you can see. As we’ve already mentioned, Xamarin is a part of the Microsoft bubble. Therefore, app development speed heavily depends on how skilful a developer is at the Visual Studio IDE and C#. Also, you should keep in mind that IDEs are heavy-weight; therefore, it takes time to build and compile even minor UI changes. Nevertheless, it has ready-made modules, layouts and a good development API, allowing to save time and speed up the development process. Recently, live reload feature for Xamarin.Forms was announced letting conclude that Xamarin is still in play.

In most cases, software created with the covered frameworks will look and feel the same for the end-users. However, the minor differences in how they operate can eventually add up and impair the overall user experience.

As React Native employs the JavaScript bridge to interact with native elements, it can sometimes lead to poor performance results. This issue is rarely visible to users, but in comparison with other frameworks, it becomes that much more apparent.

Flutter is obviously oriented on better-performing app creation. The code written is compiled into native libraries without any mediators, so the transition between platforms is seamless. However, this seamlessness comes at a cost, as due to this and an abundance of other features the Flutter engine takes up more memory. This means that the end app will be on the heavier side as a result.

Xamarin is a clear winner when it comes to performance. As it doesn’t have any bridge between the platform and the application either, the apps are faster than the ones developed on React Native. While the apps can also be on the heavier side in complex cases, they are still not as weighty as those created with Flutter.

Now let’s refer to a more technical side of the argument. Architecture is one of the most important technical things to consider before choosing a certain tool for your project. Let’s review the specifics behind the engine of each framework.

React Native operates with the Flux architecture created by Facebook. We’ve already given a simple explanation of how exactly it works: the JavaScript code is compiled into the native one during the runtime. Flux is also often used to create web applications.

Xamarin employs Mono architecture. The way it works is that for iOS it uses full Ahead of Time (AOT) compilation to compile C# code to ARM assembly language and the Android runtime for other kernels.

The difference behind the Flutter architecture is that the Dart framework it uses has most of the native components simply built into the engine. While this results in bigger apps, it also ensures its complete independence and effectiveness. Ready-made widgets and development tools facilitate application designing, building, testing, and debugging. 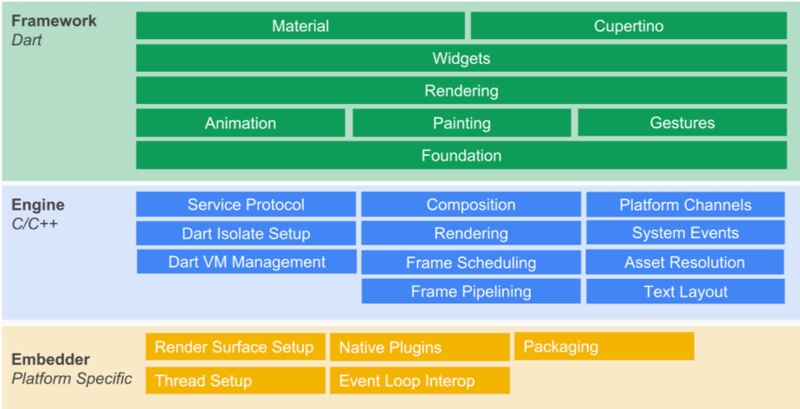 Using widgets, you can easily build any app UI in Flutter. Being a unified object, a widget can determine not only structural elements (menu, buttons) but stylistic (colour, font) or even layout components (e.g. padding).

While third-party libraries can provide a helpful hand in your app development, it is often hard to find the right one for you. Furthermore, some libraries cannot be trusted in terms of optimization and security. Fortunately, each framework has its own set of built-in features to assist you. But which option has the best collection?

Being the oldest platform, Xamarin has an impressive set of native components. In addition to them, it is also equipped with exceptionally well-written documentation on how to create an element you need by yourself.

One of the biggest Flutter selling points is the abundance of built-in elements. The awesome-looking widgets it offers can make any app feel unique and at the same time fluid and native to any platform. The libraries it includes also help with API access, device management, navigation, and much more.

React Native is the most dependent on third party libraries of the three. Device access APIs and UI rendering are the only components explicitly built into the core. However, the community is large and active enough for you to find whatever third-party library you need fast.

The biggest offender, when it comes to the development price, is Xamarin. Individual developers can use Visual Studio Community - a free version. It allows building, testing and deploying applications. But if you want to use advanced features facilitating the app development process, such as Xamarin Inspector or Xamarin Profiler, you have to buy Visual Studio Enterprise Subscription. While in some cases it is definitely worth the price, this is also one of the reasons why Xamarin is the least popular on the list right now.

Community activity and engagement levels are the biggest indicators of framework popularity and effectiveness. As each of the solutions is developed by a massive tech company, they are supported by their creators very well. But how supportive are the communities behind them?

Again, as the most mature tool on the list, Xamarin has an established community with a great understanding of each component behind it. While there are community events and specialized forums, the flow of new users is rather low right now.

React Native has a very active community that is ready to answer your every question. The fact that it’s based on JavaScript allows web developers to cross into mobile app development easily. The community continues to grow to this day, and over 79,000 stars on GitHub are an obvious proof of that.

While Flutter and Google Dart communities are not as mature, you would be impressed by how massive and active it is. The following on GitHub, which is not that far behind React Native, is a great example. Given enough time, it is sure to become the most popular tool for cross-platform development.

So, as you can see, despite being a new and improving technology, Flutter already has an edge over its peers in some capacity. However, there is still a lot of untapped potential and ways for it to rise above all other options.

For example, it has recently been announced that Flutter will soon support multiple platforms in its fullest, which means web apps and applications for Windows, macOS, Linux, and even embedded platforms like Google Home Hub.

Multiple companies have already appreciated the technology and support behind it and started using it for their apps. They include:

Being only around two years old, Flutter has already occupied its niche in cross-platform software development. While it has its cons, the pros make it worth employing a specialist and developing an app using it. If our arguments have convinced you, our team is ready to help you to create your own unique multi-platform application. Contact us right away and we’ll discuss all the details for a perfect design.