How to Build an Augmented Reality App Like IKEA

If you are an active mobile and computer user, chances are you have used at least one augmented reality app. Video games, visual presence, whatever it is, this technology is making its way into our lives and becoming part of the routine. Virtual reality apps and devices no longer surprise people. In fact, apps like IKEA have become an idea of customer service development. So, let’s talk about what augmented reality is and how can we use it.

What is Augmented Reality?

Augmented Reality is a way of adding virtually created components into the real life picture. The layer of visual effects is only one part of AR. The user can also be affected by sound effects or sense of smell. All of these parts help the user to get a fuller experience. Components introduced to reality show things in a different light, which makes up the main difference between augmented and virtual reality.

Augmented reality app developers concentrate on creating separate components that are added to the real picture. Virtual reality app development, however, requires a complete replacement of the scenery. The picture the user sees no longer has anything to do with the real life. Besides that, there's also a mixed reality and computer-mediated one. The mixed reality is a combination of the augmented and virtual ones. Computer-mediated reality simply refers to using devices like a phone or glasses to interact with the virtual environment.

Where is Augmented Reality (AR) Used?

When we think about virtual world introduction, the first thing that comes to mind is generally the gaming industry. Yet, the usage of AR is much broader than just games. It can be used in fields like archeology, architecture, and biology for virtual modeling. Commerce uses augmented reality to make interactive ads and marketing videos. For example, Pepsi has created an interactive application which is embedded into their vending machines. And IKEA allows you to virtually place furniture in your apartment to see how it will look.

AR is also used in the education field. Initially used as a technology for providing supplementary information, it quickly turned into something more. Now, students can become part of a simulation of historical events, watch the universe, or perform a human body simulation. Students aren't the only one to make use of this technology; specialists in various spheres use augmented reality for training (pilots, doctors, astronauts, etc.). And this is not a full list of the technology's application.

Just like developing any other app, the AR app will require a lot of planning. You'll need to decide on the functionality and the design before you start with the rest. The application should solve some problem. You need to make sure there's a demand for the service you are creating. One of the most important things to distinguish is the need for special equipment. Depending on how you want your app to function, you might require integration with glasses, lenses, special gloves, etc.

After the planning stage is completed, you can start searching for a company to do the job for you. A good contractor will not only know how to develop an Augmented Reality app but will also be able to advise on features, design parts, and support processes. You will be able to discuss the whole process with professionals in the field to achieve the best result possible. There is no one universal method to make an AR mobile app since a lot will depend on the functionality, application, and tools used. So, we’ll discuss a particular example from IKEA.

Read also: How to Develop an AR App with React Native

How Does IKEA’s Application Function?

At the moment, IKEA has three applications. One is an online store model which allows you to track products in stock and get them once you're at the location. The other is an IKEA catalog, which is extended compared to the one online. Third is the IKEA Place app, which is the one of interest to us, as it uses Augmented Reality.

The app allows IKEA customers to try around 2200 pieces of furniture in their homes without purchasing anything. This proves to be a great help for those who want to find the perfect match for their home. The application displays furniture in real size according to the dimensions of the room in a 3D model. This way, a customer can try things before making a purchase. Currently, most of the furniture presented in the app are bigger pieces for living rooms (sofas, coffee tables, dining tables, and so on).

The service was initially only available to iOS users as it was based on Apple’s ARKit platform. Beginning in March IKEA introduced the app to Android users. Their first attempt at introducing a similar service was in 2013 as a part of their catalog. In autumn 2017, it was developed as a separate application. The app quickly gained popularity because it is so unique. Another great thing about it - it’s free. 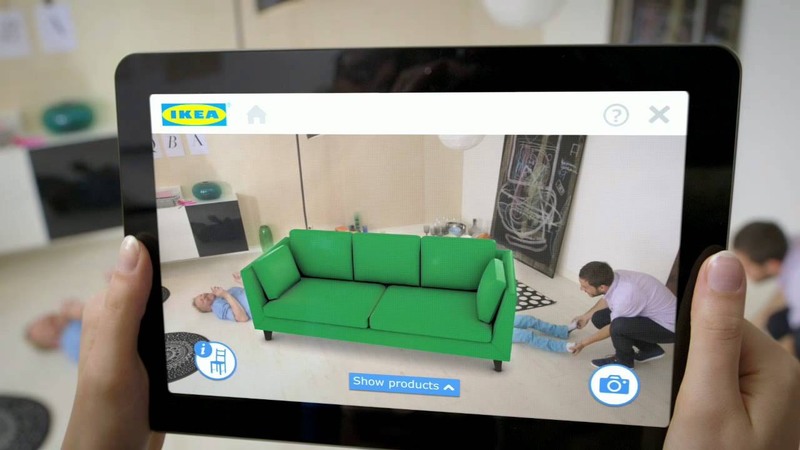 Before you start with development, you need to go back to the sources, in this case, the feature list. If you want to create a similar service, you need to figure out what the original one includes. First of all, IKEA Place consists of two modes: Catalog and AR. The Catalog mode is responsible for providing descriptions of the items in various languages. The AR part, however, gives users an opportunity to try IKEA products in their homes.

The main features included in the AR mode are:

Additionally, there are options for commenting, sharing design mock-ups on social media, and receiving notifications about discounts, sales, etc.

Unfortunately, IKEA does not disclose which technologies and tools were used to create this application. All we know is that Apple’s ARKit was used for the Augmented Reality implementation. Also, Unity engine was used for supporting 2D and 3D objects. The ARKit platform helps to introduce the AR elements with the information received by a device from the camera.

The cost of developing such an application will vary depending on complexity and the contractor you choose to work with. A skilled Augmented Reality app development company will have all the required specialists available to help you. And the final price will depend on the hourly rate of the specialists or the team in general. On average, the development process will cost you about $30,000+, but working with professionals will help you build a high-quality product that will bring you value.

As with any other process, to understand how to develop an AR app, you need to start by determining the purpose of your application as well as the required minimum features. From there you can go deeper and consult with a developer and a designer about the tools and technologies required. But make sure to consider various contractors to get many opinions so you can make the best choice. If you have any questions - don't hesitate to contact our experts with your project description!