When we are talking about cross-platform development, the first associated frameworks that come to mind are React Native and Xamarin. Unfortunately, there aren’t so many developers that are sufficiently skilled in both of them. If you are a beginner programmer challenged with the ‘Xamarin vs React Native’ dilemma, or simply prefer a cross-platform approach in the implementation of your project, we are ready to help you choose the best developmental environment for your case right now.

React Native (RN) is a JS-based framework created by the Facebook team that was released in the first part of 2015. With the ReactJS library as a foundation, the framework employs native components for front-end (which interact with the JavaScript code with the help of special bridges instead of traditional WebViews). From the practical perspective, this allows creating ‘reactive’ (performance-wise) cross-platform applications for iOS and Android.

React Native is currently used by tens of thousands of companies. It is especially preferred by startup developers because it is absolutely free and doesn’t require any additional expenses. In particular, the news website of The Guardian was built with the help of RN, as well as globally used Facebook and Skype apps.

Currently owned by Microsoft, Xamarin was founded back in 2011. This development environment is intended for the creation of cross-platform mobile software on C# with the involvement of .NET. Xamarin supports iOS, Mac OS, Android, and Windows Phone. 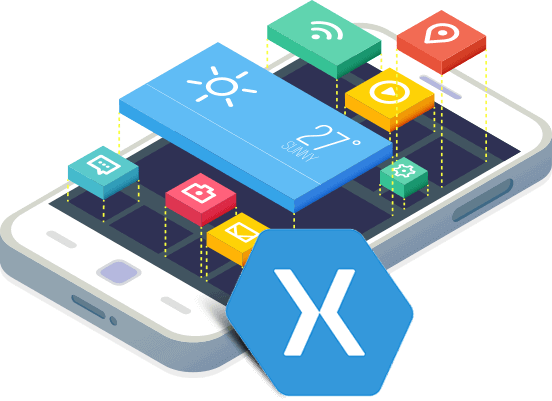 More than 15,000 companies use it in their developments every day. Famous apps built with Xamarin include Novarum and Story.

Comparison of capabilities and major features of React Native and Xamarin

Take a look at this detailed React Native vs Xamarin comparison in order to be able to make a reasonable decision of which to use in your project:

React Native used to be an innovative solution for implementing data-binding processes back in its time. Particularly, this framework employs one-way data-binding, i.e. it binds model definitions with representations and doesn’t involve a separate supervisor to help detect whether a user customized the definition in the view or not. This, in turn, provides a performance boost for apps. Although, RN supports two-way data binding as well (implemented manually) to provide the mutual coherence of code and decrease the chance of complex errors.

As for Xamarin, it involves a stricter MVVM architecture with two-way data-binding that more developers are familiar with, which provides perfect teamwork conditions (multiple departments can take part in the development process simultaneously – e.g. design and programming departments). This is, basically, the principal difference when it comes to working with each platform. Thus, choose RN if you require strictly performance-oriented capabilities and Xamarin for a more flexible approach.

React Native is well known among developers for its big number of built-in components, all of which are available in the packages manager nom. You can focus your effort on building application architecture and making templates of very specific functions, while also employing ready-made tools and features (which even have dedicated documentation).

Talking about Xamarin, in addition to the standard set of .NET classes, developers always get access to classes, native to Android and iOS platform, through Xamarin.Android and Xamarin.iOS respectively. This allows developing software identical to native.

In React Native, compilation works in the following way: first, a native wrapper compatible with UI is created; the whole JSX/TSX/flexbox set is parsed into it while the business logic user code is transferred into JS. A ‘Just in Time’ type of compilation (JIT) isn’t available for iOS applications in this case – this may slow down software code execution processes a bit.

In Xamarin, compilation works in a slightly different way. JIT compilation also doesn’t work for iOS here, so it can be replaced with an ‘Ahead of Time’ (AOT) type of compilation. It performs even faster.

React Native requires a knowledge of JavaScript for the creation of apps. JS is one of the most widespread programming languages. On the other hand, this excludes the possibility of writing some parts of your cross-platform software with the help of third-party solutions, or introducing new technologies, languages or libraries. Nevertheless, RN is very accessible to work with: developers tend to emphasize the framework’s steep learning curve.

In order to create an app based on Xamarin, you won’t need a knowledge of Java/Kotlin (for Android) or Objective-C/Swift (for iOS). And you still get full access to all capabilities of the SDK platform due to Xamarin.Android and Xamarin.iOS libraries (i.e. it’s unlikely that you’ll require any additional tools – everything you need is probably already included in the Xamarin package). Thus, all you need to work with Xamarin is a knowledge of C# and .NET technologies, as well as basic skills of working with native classes for both platforms.

A tool called Jest is usually used for testing apps written on React Native. It has stood the test of time, is accessible, and features good documentation.

As for Xamarin, Xamarin UITest is used for the creation of auto-tests here. It’ll come in handy if you need to compose UI tests for both platforms simultaneously. Additionally, it has an inbox Xamarin Test Cloud support (a very useful, but expensive feature).

Tens of thousands of developers have already noticed how accessibly and coherently the React Native documentation is composed. You can also take a look at this article at Github to learn how to work with it, and even try RN functionality without having to install any software.

Xamarin also has pretty good documentation – it features examples and step-by-step tutorials. However, many developers still tend to appreciate the RN documentation more if asked, ‘React Native or Xamarin instructions?’.

If you come across any problems while building an app in React Native, you will easily be able to find an answer online. It’s relatively young, but very keen and developed.

Almost the same goes for the Xamarin online community. It’s even more extensive, having had more time to grow and expand. Xamarin also provides help in resolving issues in the form of personal tech support available in the business license of the software.

React Native is free while Xamarin has both paid and free versions (the paid one is for corporate-oriented purposes).

So, what to choose – React Native or Xamarin?

Now, for the main question: what to ultimately choose – React Native or Xamarin?

We believe that the main reason for choosing Xamarin is the amount of universal code, which can be distributed between platforms. For instance, with Xamarin.Forms, up to 96% of code can be available for software implementation based on both platforms. In the case of React Native, it’s 90% of code. Xamarin also allows using fragments of the business-logic’s back-end code repeatedly in the mobile app development if the initial back-end was implemented with .NET (C#).

If we're talking about performance and you’re looking for the fastest rendering along with the high overall performance, RN is your best bet in the cross-platform approach aspect (moreover, programmers tend to avoid using Xamarin for the creation of interactive software).

Last but not least, the pricing policies – both the Xamarin and React Native are absolutely free.

On top of these recommendations, we can only add that you should carefully consider your own preferences and the experience of your developers. If you’re an ace at C# and possess only basic skills in JS, React Native isn't the one for you (unless you’re planning to learn instead of creating a commercial project).

We hope our attempt at comparing React Native and Xamarin helps you with your choice of the most fitting cross-platform software-creation framework. If you have an idea for a commercial solution that you believe would stand up to the competition in the niche market, let professionals work on your concept. Applikey Solutions has colossal experience in the development of cross-platform apps. Contact us and let's make your project successful together!