Why Ruby on Rails Is a Good Choice for Your Website

IT companies are constantly in search of development environments that can simplify the process of writing capacitive code structures, have enough tools to create scalable software with advanced functionality, and provide the highest level of performance during assembly. 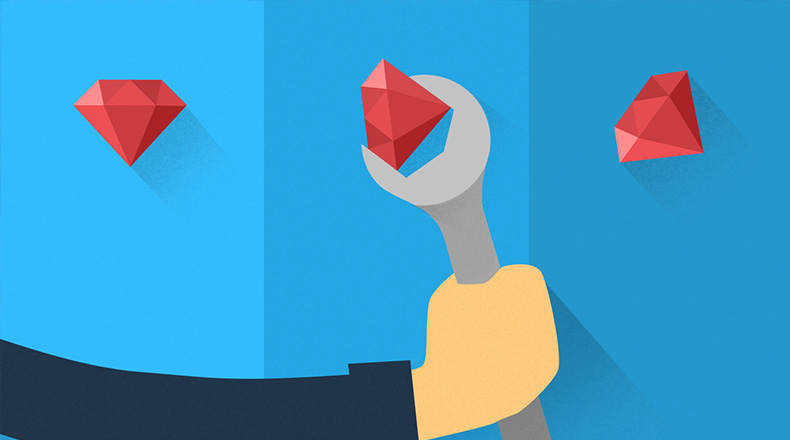 As practice shows, the vast majority of customers increasingly prefer their software solutions to be based on Ruby on Rails (RoR). What is the reason for such popularity of this framework? In this article, we strive to find out if this development environment is really as convenient as advertised.

Ruby on Rails is one of the most popular open source code frameworks and is based on the MVC (Model-View-Controller) concept. This framework was specially created for the development of web applications.

The first release of Ruby on Rails came in 2004. The framework was based on the reuse mechanisms code (the "do not repeat yourself" principle) and the configuration agreements for most typical expressions (the "convention over configuration" principle). In practice, these two principles provide an extremely smooth transition from the private to the general, thanks to the easy readability and versatility of the created structures.

In addition, Ruby on Rails provides full-fledged tools that embody most of today's most promising technologies and approaches to code creation, such as TDD, MVC, ORM database connectivity, design templates, integration with AJAX and Git, and the possibility of SaaS development and deployment.

In April 2017, the latest version of RoR-5.1 was released. In addition to the above advantages, it does not depend on jQuery, and includes the Yarn package manager for the JavaScript libraries support, along with a number of new useful plugins.

Let us consider the practical benefits of Ruby on Rails, which make this platform one of the most popular among similar solutions.

Rapid development from scratch. Ruby, in conjunction with the Rails environment, allows for the implementation of large-scale web solutions as quickly as possible. In particular, RoR provides an incredibly elegant database and is abundant with a huge number of tools that help to create the basic functionality of your future website. Together, these features accelerate the process of Ruby on Rails programming. That's why this framework is most often used to create sites with complex architectures and those that involve binding to separate data stores (online shops, corporate websites, online learning sites, etc.)

Ease of learning. Despite RoR's focus on building websites with a capacitive architecture (which could mean a long period of studying the operation of the framework), it is, in fact, extremely easy to learn. Because Ruby uses an object-oriented programming language, it imposes very strict boundaries on the code structure construction. Thus, even beginners can master the basics of RoR quickly. They receive a weighty advantage in the form of unambiguous implementation of the conceived functionalities, and spend only about a month mastering the fundamentals of this library.

Lower project cost. The budget initially allocated for the development of a website often begins to grow upon progression of the project. Sounds familiar? If the answer is affirmative, you should definitely pay attention to the RoR. Since the total cost of a website is directly influenced by the development period, it is in the interests of both parties (the customer and the development team) that this term would be as short as possible. RoR employs easily understandable paradigms, allowing for reduced time for the direct development of a web application, while coding in similar frameworks would take a noticeably longer period. 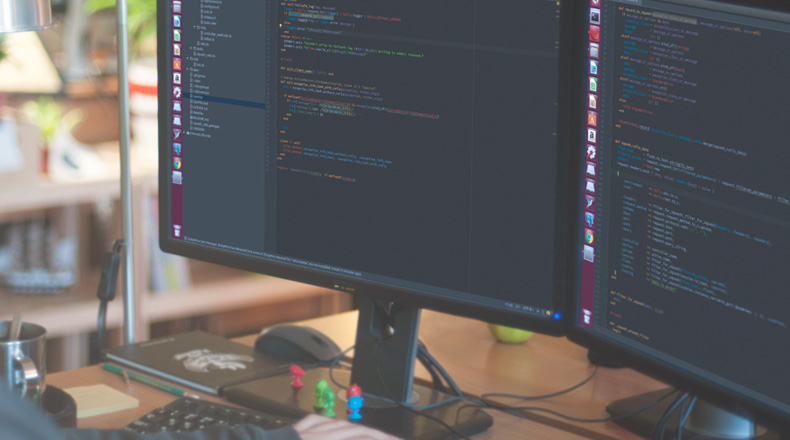 Smooth database integration. As mentioned earlier, one of the most notable features of RoR is the simple integration with databases. The framework minimizes writing of the "boring" code needed to implement connections to external resources and allows concentrating as much as possible on the development of main functionality.

Extensive community. Ruby on Rails is not a novel development environment which means, today, there are a large number of experienced and highly qualified developers available, many of whom are regulars in IT forums. Using these and other means necessary, even a novice RoR coder can find an answer to their question without any problems. Even if your predicament is unique, you can create your own topic on one of the topical forums and, after a few hours, receive the right recommendations for your specific project..

A large number of experienced staff for hire. You can easily find really experienced developers who have been actively practicing RoR for a substantial amount of time. It is thanks to the time-tested professionalism of such personnel that you will be able to find the most rational ways to realize the conceived possibilities of your website in order to maximize its productivity.

Scalability and modularity of created software solutions. Let us turn to the first principle of RoR: “do not repeat yourself.” Indeed, this development environment was built in such a way as to use universal coding structures that could be implemented in various solutions. This factor plays into the hands of IT companies, whose activities are aimed at developing template modules which can be easily scaled or applied in other projects in the future.

Convention over configuration. Thanks to the second basic principle of Rails, most of the parameters of the framework, its plugins and modules are pre installed to reasonable defaults. This allows developers to reduce distraction by the preliminary configuration of project options, adjusting only those parameters that are absolutely necessary.

Standardization of the generated code. Working with RoR involves a clearly predetermined code paradigm. Indeed, if you are an experienced developer, then there are cases when you should start maintaining a previously created project you spent hours on, analyzing the code written by other people. Sites built with the help of RoR are nearly devoid of such problems. After all, almost any of the code blocks written has a unique interpretation and, therefore, developers do not have to spend too much time puzzling over ambiguous designs, ensuring your team gets more time for the actual work.

A large repository of free plugins. The abundance of free plugins, called gems, is another RoR advantage. As history has shown, RoR is often the chosen solution for startups. In working with RoR, you can customize your website for any business need - for example, create your own exclusive social network or introduce advanced e-commerce services with a high degree of user data protection.

Ideal development environment for web designers. Are you a novice web designer using only graphic editors for commercial website design? Thanks to tools such as Compass and Sass, web designers are in a great position to create and maintain the styles and layouts of internet pages without resorting to CLI usage.

Ease of adjusting the finished software. Rich in plugins and standardized code structures, RoR saves time on development. A wide variety of plugins help to implement the routine tasks in a simple and efficient manner. Moreover, in order to modify or supplement the previously created website, you do not need to spend much time or effort.

Ruby on Rails was involved in the development of such popular sites as Twitter, AirBnB, Groupon, Shopify, and Basecamp. What were the reasons to use Ruby on Rails in these specific cases? Let us look a bit deeper. 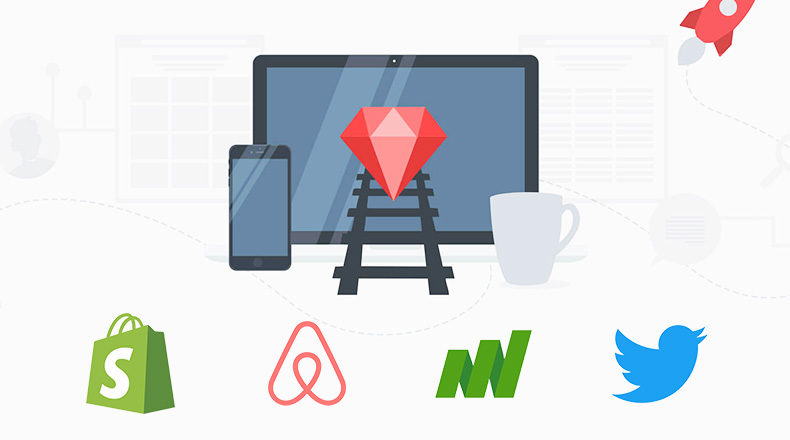 Twitter. Ruby on Rails was used in the development of Twitter in order to create an easily scalable platform. In 2008, Twitter announced the planned transition to Scala, to provide even more performance and expandability, but the company’s management is still arguing about the advisability of such a transition.

AirBnB. AirBnB is an online platform, which is an intermediary in real estate rental transactions. Rails was used to develop it, thanks to its well thought-out payment system.

Groupon. Initially, Groupon was a one-page Internet site created completely using Ruby on Rails. When developers were searching for a suitable framework, support for a large number of plugins, which helped to quickly implement all the functionality required for the site, played in favor of RoR.

Shopify. Shopify provides an advanced platform for creating and hosting online stores and other e-commerce sites. Using Ruby on Rails, you can create your own solution based on Shopify-ready templates in a matter of minutes. Choose the needed plugins and, in five minutes, the site will be up and running!

Let us generalize the reasons for using RoR. Referring to the above particular cases, as well as statistics, this framework is most often used to create business-oriented sites, as well as sites with a commercial focus.

- Single-page websites and business card pages. It is better to use CMS, in most cases, to create sites with an extremely simple template structure. This will reduce the overall budget of the project and simplify the procedure for the administration of a ready site (most modern CMS have incredibly thought-out content management mechanisms that are easy to master even for non-advanced users).

- Sites with unique and frequently updated content. If the concept of your new site contains a constant replenishment of unique content (as is typical for news sites and blogs), you can find more advanced and less expensive solutions for its development (for example, the same Wordpress CMS, in which you can find hundreds of both paid and free templates).

Summary: why use Ruby on Rails?

Let us sum it up. As our analysis of the benefits and nuances of Ruby on Rails shows, in the vast majority of cases, its study and further practice justify itself 100%. RoR is one of the best frameworks for website building. It is convenient, simple and, therefore, deservedly receives great popularity among web developers. We should note also that Rails knowledge gives an excellent base for a good career (as noted above, many successful IT companies develop their solutions with help from this framework).