How to Make a Mobile Payment App Like Starbucks

With early income comprising over $14,8 billion, Starbucks is the most profitable coffee house in the world. Nevertheless, the company keeps on coming up with even more perfected formulas of attracting customers and, therefore, accumulate both more volumes of income and physical coffee shops’ traffic. With that in mind, Starbucks has released a mobile application for pre-ordering beverages and food, which is, basically, another great way to pay for your order via smartphone. And according to eMarketer, Starbucks is the most popular mobile payment app leading over Apple Pay, Google Pay and Samsung Pay.

You will find this article useful if you are a striving eCommerce entrepreneur/market player that is planning to launch a solution similar to the Starbucks’ one.

Starbucks App: How Does It Work?

Starbucks is an order-and-pay type of app. Primarily, the application allows checking out the nearest coffee shops, viewing the balance on your Starbucks gift card and history of transactions, use it as a usual credit card in Starbucks shops only, replenishing the Starbucks card via a credit card, and indicating the credit card requisites in the personal profile. For each purchase, you also get stars, for twelve of which, you get a free beverage. Otherwise, the app also notifies you regularly about the related news and special offers. It is, basically, a Starbucks’ mini-assistant in your smartphone.

And now, for a few related facts to let you fully realize just how popular the Starbucks’ solution eventually came to be.

Thus, in only a couple of weeks after the initial release of an app, the number of regular orders became so high that it provoked clusters of customer queues. The company management started taking the situation cautiously, which resulted in the opening of a number of new vacant positions - for employees that, during the rush hour, would work on online orders exclusively.

What this decision brought eventually is 10% of total company profits made only for 2013 was the mobile apps’ achievement. And the number grows with each year, according to the company’s official financial reports. 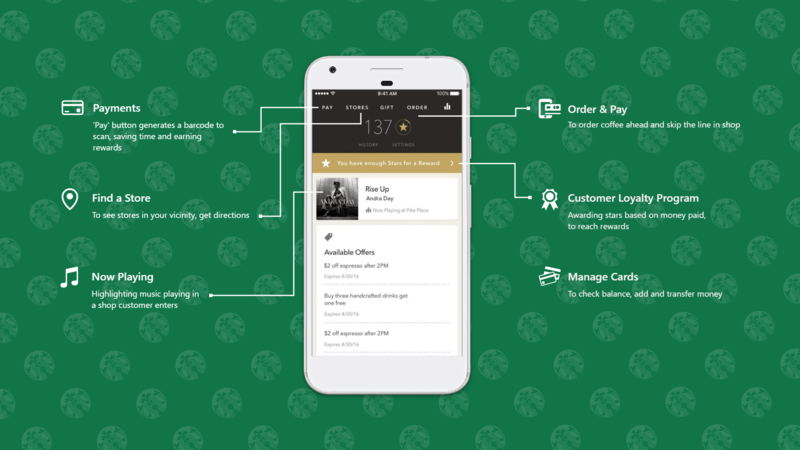 Is this not a reason enough to launch a Starbucks-like app to go for the similarly impressive statistics?

Before getting to enumerating the standard set of features for your future product, let’s overview the basic capabilities of a Starbucks solution:

This is the general image you should strive for in building an app for food orders. And now, let’s take a closer look at the necessary attributes of a well-optimized, thorough solution to fit the top standards of the modern eCommerce industry.

Everything’s simple here - you need to provide an account, a user cabinet, where customers will be able to store their contact info and requisites, as well as check their ordering history, balance, and gained bonuses.

A shopping cart is an element by default for all commercial solutions. However, you can turn this standard element into an effective marketing tool, by supplementing it with the ‘last-hour’ offers or something like that.

This is yet another must for a commercially-driven app. Not only this lets customers share their favorite orders with friends and subscribers. Social media connection capabilities also provide a more secure log-in procedure (some of the best developers of the world worked on the security of popular social networks’ authorization APIs).

In order to enable your future customers to make orders through an app, you will need to integrate a payment gateway that would process the payments. There are a bunch of readymade solutions available (like Stripe or PayPal) and you can also connect some custom developed web service. The readymade options, however, are quite cost-efficient - no need to get the PCI compliance certificate (which is quite a cumbersome procedure) or anything.

But if you need to implement a custom payment gateway, you should become a PCI compliant first. You need to learn security standards for your type of business, make the necessary security improvements due to self-assessment questionnaire (SAQ), find a provider that uses data tokenization to keep your customer data safe, fill out a formal attestation of compliance (AOC), and only after that you’ll be able to file the paperwork with banks and/or credit card companies.

In case something goes wrong and your customer changes the decision you need to take care of the money back feature in your app.

Obviously, not a single app of such kind will do without the interactive menu. Your task is to make it as user attractive as possible - by involving advanced technologies like augmented reality, for instance. It isn’t a cheap marketing strategy, but, according to practice, it is fast to compensate all the related expenses when implemented (AR-based apps are usually in high demand among mobile users upon release). We’d also recommend making each item on the menu have a dedicated rating and customer feedback sections.

In order to make it easier for your customer to find your offline establishment, it would be great to connect a special API with maps and geolocation capacities. The most commonly employed option is the Google Maps API.

As a matter of fact, there is no such feature in many apps of such type, which reduces the servicing reach a bit. It is utterly convenient when a user is able to book an order beforehand remotely. This is a very simple in realization feature, which, in turn, will bring loads of profit upon implementation.

This is also a must-have feature that allows customers to check on which stage their order is at the moment. Such an indication is a quality representation of your professional concern as to customer satisfaction. And it doesn’t take much developmental effort to implement as well.

This app feature allows customers to see the time window when the order will be ready depending on how much orders are currently in the waiting list.

There aren’t so many apps compatible with smartwatches out there as compared with the smartphone niche. That’s why it would be a great thing to let the owners of wearables also make fast remote orders and pre-orders.

The feature allows making an order via Google Assistant (Dialogflow) or the Amazon Alexa platform. Actually, Starbucks launched voice ordering on its mobile app last summer. You can order food or beverages using your phone or smart speaker.

This here is a relatively novel feature in the field of foodservice industry mobile software development. The thing is, many offline establishments specializing in some certain cuisine (like sushi or pizza) decided at some point to expand their menu for the mobile users exclusively (this method allows analyzing the demand for certain menu items with minimum expenses). So if your restaurant specializes in French cuisine, for example, you can offer some Italian dishes as an exclusive mobile option. 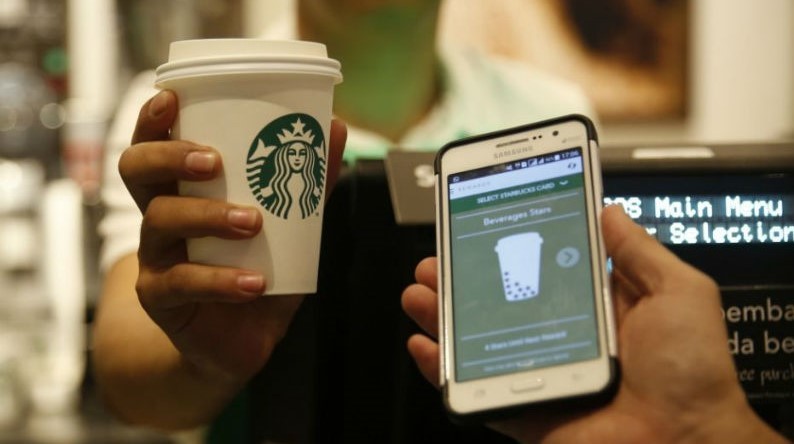 The special attention should be paid to the privacy of user data. Thus, the Starbucks apps for iOS earned a pretty notorious reputation and all because of not efficient enough security system. See, the app used to store all user data in an unencrypted form. Scammers could easily connect a smartphone to one of the corporate PCs without anyone’s notice and download any username or password they like. The app stored the customer geolocation data in such an unprotected manner as well. This was not a gravely dangerous flaw - maximum a hacker could do is make an order using someone else’s account (which isn’t such a catastrophe after all). Nevertheless, this fault provoked a lot of negative feedback and served as a good example for other business owners.

How Much Does Starbucks-Like App Development Cost?

Now, let’s find out how much you can potentially spend building a Starbucks-like mobile app.

Ultimately, it depends on numerous aspects - from the final set of features to the general development route - cross-platform or native one.

Obviously, native solutions always mean the better adaptedness to the native OS, its initial features and original design. If you want to keep your product as exclusive, this is the way to go.

But, as practice indicates, cross-platform solutions are equally reasonable to build (especially, considering the introduction of advanced frameworks like React Native and development algorithms that help to accelerate rendering as well as adapt the interface to all involved platforms as much as possible). You can construct an app built in shorter terms and with lesser budget compared to the opposing option (native development). Such a solution will also be simpler to support further on because it won’t be necessary to employ two teams at once in the case if you need to add some new feature.

Getting further into details, we need to consider which experts will be working on your project and for how long. As a rule, it’s near to impossible to plan the budget precisely at the initial stage of the development (i.e., a fixed price may not be an option here). Thus, you will probably have to pay developers by an hourly rate.

Next, the development process as a whole is subdivided into several stages:

The first stage in the creation of an app like Starbucks’ will take approximately 600-650 man hours. The design is an artsy craft and the cost of its implementation may depend on whether you have any source materials ready at hand or not (perhaps, you already have a dedicated website, then you can copy its major stylistic concept). Nevertheless, let’s assume that the design will be implemented from scratch. In such a case, the whole process will require at least 200 man hours. The backend is the most challenging part - be prepared for about 500 man hours of developers’ work. Finally, testing and overall quality compliance usually take 100-150 man hours in total.

All in all, we are talking about somewhere around 1,400 man hours in sum (in relation to an app with the minimum set of features, without any advanced elements of augmented reality or something like that). Multiplying this number by an average rate of local developers - comprising $40 per hour - we get a $56,000 budget.

If you wish to analyze the demand of your software with minimum expense risks, we’d recommend launching an MVP on the market for starters. In such a case, the initial budget of an app isn’t so costly and you can profitably plan the further implementation of some extra features.

Apps like the one Starbucks has created usually show lots of potential. More and more people tend to value their time more (due to the intensive working schedule of most employed people). In just a few years, we are confident that every other person will be using such type of software to save time. This means that you have all the chances to take one of the leading positions in the niche. There aren’t so many players out there right now, so seize the moment! 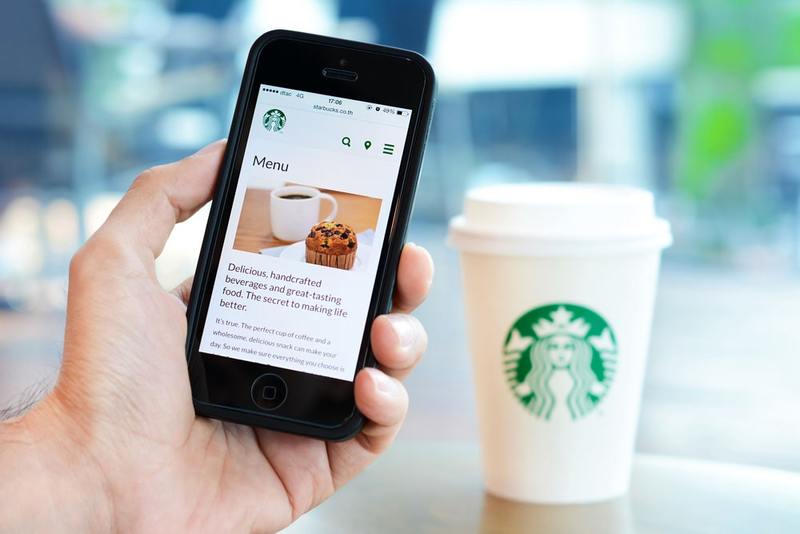 Got an idea for the implementation of your own app like the Starbucks’ one? Excellent, we will gladly help you make it a reality! Fill up the contact form and the guys from our team of expert development services providers will soon contact you to discuss all the further details of your project.