What Should You Know About Google Instant Play (Android Instant Apps)

The late 2017 was a momentous period for Android-based developers. Being announced previously in 2016, a long-sought new option was launched in Google App Store. An option to run applications without downloading them! In actual fact, it is possible due to compact demo-versions, which offer users to assess the software features in one “Try now” click, and no download required. From there a special section named “Instant Play” appeared in Google Play. Accordingly, applications located in the mentioned section are called Instant Apps. Herein under we will examine their technological features, their advantages as for developers and why they are so attractive for users.

Instant Play section: what do we need it for?

Not so many applications were presented in Instant Play section from its inception. They were different players basically, and no games at all. Moreover, some users faced the situation when the developer’s official website opened instead of demo version. As it turned out, it happened only with users of the old versions OS smartphones (Marshmallow and earlier), and there were no such issues with Nougat and Oreo gadgets.

In the first half of 2018, it had become possible for games developers to upload their applications into Instant Play. In order to qualify for uploading their demo-versions into Instant Play, any developer must fill in a special form to submit a request to participate in the corresponding project. And get focused on technical implementation of their current solution, of course.

As for users, the feature of instant application allows them to assess as free any app before downloading it to personal devices. There are suggestions that mentioned feature basic target is to decrease the number of refund requests from those users, who were not satisfied with the quality of the purchased product. To enjoy Instant Play advantages any normal user should have Google Play version 2.18 and above installed on their smartphone.

Instant Apps: what is it?

So, what the instant applications are considering from a technological perspective? In point of fact, these are applications being downloaded and run automatically while user purposely browses through Instant Play section, either uses third parties soft services, which is integrated with specific Instant App functional. Due to this users do not have to go through the full installation cycle.

Now it can be seen that opening any app by means of Instant App takes no longer than a couple of seconds and doesn’t require the smartphone owner to perform any additional manipulations.

The only disadvantage of such Instant Apps is their partial functional in comparison to full versions. On the other hand, such an approach to applications development is a go-to in a situation when a user doesn’t want either cannot download the full version but still needs to get access to some of its functions.

This is exactly why such applications are useful as for those, who search for new and exciting mobile soft (here we talk about mobile games above all), either for those whose devices have a typical problem of memory shortage. Thuswise there’s no need to wipe the phone’s memory, deleting photos and videos just to have a chance to use the new soft functional. It will be uploaded automatically at the right time. 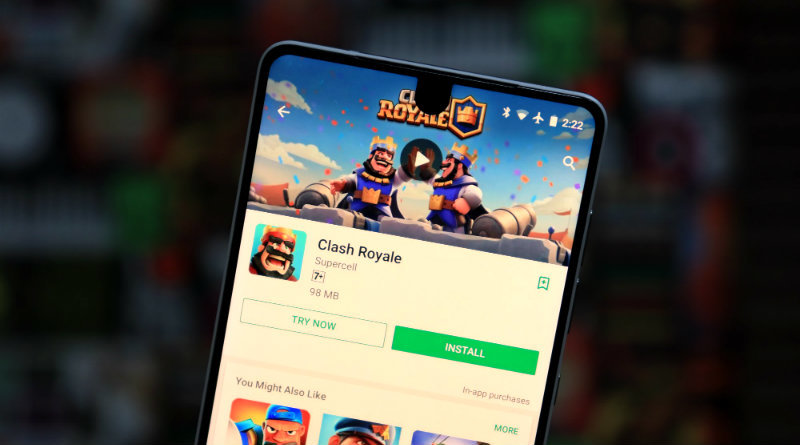 The next apparent advantage for Instant Apps developers is the fact they get massively more installations of their software. This takes place for the reason that users can try soft in the “economy of motion” mode. All they need is to find a link to your soft in Google (messenger, mail either any other informational resource), click it – and here we go! The application, or to be exact its subset, is automatically downloaded on the user’s device. After a couple of easy and convenient manipulations, the user gets a possibility to assess the proposed soft functional, that might motivate him to purchase and install the full version.

And the last thing that certainly should be mentioned in the list of advantages is that fact that Instant Apps is a relatively new Google Play section. It means that nowadays not that many applications presented there (and the games particularly). So there’s not a lot of competition in this niche. I.e. whichever Google Play user who discovered this project out of an independent source of information can just visit Instant Play. He’ll see your application, he’ll test its features and will not hesitate over a choice between it and numerous analogs. Sometimes the lack of choice is more effective than the ballyhoo.

The textbook example of an application out of Google Instant Play section is Vimeo. You don’t even need to visit the corresponding Google play section to appreciate this instant solution benefits.

If you give a query of "Vimeo video" to any search engine, you’ll get a long list of videos, and clicking their links will bring you to Vimeo official site. This is a scenario for a situation you surf the internet from your PC (laptop). In case you’re on Internet from your Android smartphone which doesn’t have Vimeo installed, Instant App Vimeo version will be the result of your search.

Actually, you haven’t taken any steps to install the application’s light version (your smartphone system have done it automatically), but you have gained access to the video player and could have watched videos.

Android instant apps can be profitable for e-commerce organizations and game developers. End users can easily find the company's instant app through a Google search and try it immediately for free. For game developers, it is a chance to reduce refund requests caused by the clients' unfulfilled expectations. Also, it opens up more opportunities for promoting a new game by means of implementation instant app for a particular level in order to pique a user's interest. OneSoft boosted game install rate by 15% using instant apps. 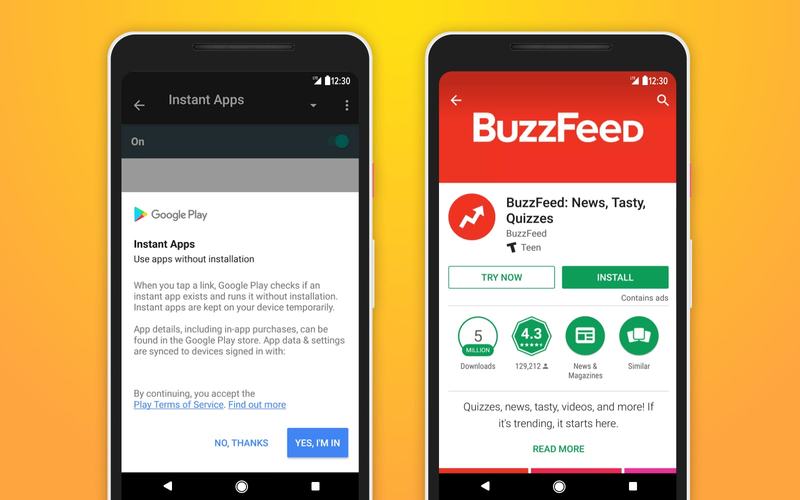 However, there are examples of using instant apps not only in e-commerce and game development industry. The New York Times used it for crossword games. Skyscanner, Buzzfeed, Onefootball and Red Bull TV should also be mentioned by us as very popular Instant Apps these days.

An application for Instant App: how to create it?

And now let’s provide insight into how to create an Instant App version for mobile soft.

The general idea of Instant Apps is as follows: in the process of creation, the developer builds his program the way it has an easily separated part that can be downloaded individually. It is not necessary to create a new code branch in this case, all you need is to trigger the Instant Apps software interfaces at the right point. Thereafter the application uploads to the corresponding Google Play section and users get access to all its features and advantages (as there is no need to download or to buy it).

As for some of the finer points of implementation, we must mention that Instant version is usually created within the same project with the main application. Then the programming code is being split into separate modules (we talk about modules developers deal with in Android Studio). By default at the moment of standard Application code writing, only one module named “app” is generated automatically. In case Clean Architecture is used, a couple of additional modules is added to the mentioned app. So when you need to create an Instant App version of your application each separate module should represent one soft’s feature.

In addition to code responsible for a definite feature, the classes used by the module should be also indicated.

It will not go amiss to mention that there is a special module called “base” (usually all the modules with features contain the description of specific base-module dependencies) for commonly used repositories and their classes that will be implemented in a module. This module can also contain the specifics of standard feature-module.

As a result, you get a module structure for your project that will include one base-module and a required quantity of feature-modules. Depending on which features exactly you want to propose your users in your application Instant-version, you build two versions of your soft: a basic one and the light one. A light version will contain base-module and a restricted quantity of required feature-modules.

It sounds seemingly simple – all developers need to do is just cut the additional (usually, paid) functional out of already existing project either to build a new Instant App from scratch and then add required features there. Nevertheless, developers' experience shows that both conversion procedure and writing the code from scratch are more to this than meets the eye.

Here we offer some tips you should consider while Instant Apps development:

At first glance, Instant Apps seems to be free from any disadvantages. It provides users with some applications functional for free, that is mutually rewarding for both users and developers. It is expected that after a quick reference with “instant” solution features, the smartphone owner will be minded to buy its major version. 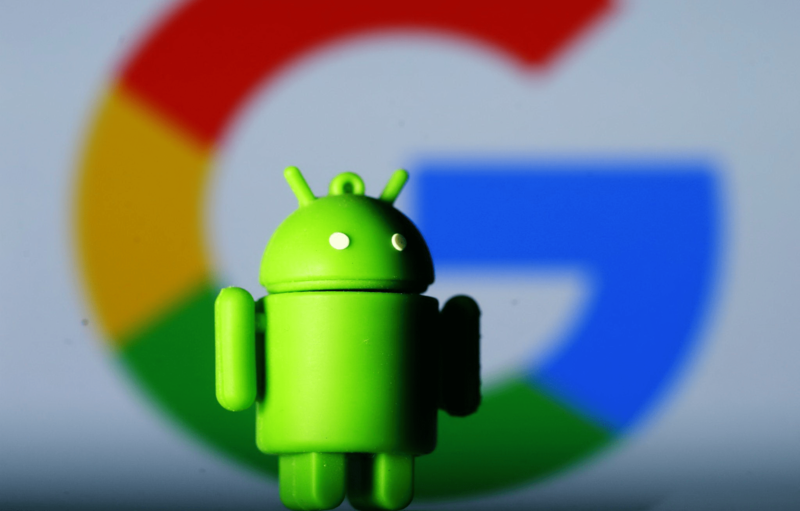 On the other hand, doubters cast this project to have a mixed outlook. Let’s run back to those times when Microsoft Word standard was closed (what was technically quite normal back in the eighties of XX century). In due course, as we all know, the growing need for Word solutions became universal, and its format turned into a paradigm. The key point raised in the following debates was the necessity to provide open source alternatives.

Anyway, there is a general belief that Instant Apps is a future applications standard. Consequently, any third-party software developer won’t be able to explore the code that will result into serious issues with operating systems compatibility.

It stands to reason that all mentioned above is a hypothesis, and there were no discussions performed in the context of real-world problems.

It’s time to summarize. As we can see Instant Play and Instant Apps as such – are not just another marketing ploy for developers. It can be profitable for e-commerce, game development industry, digital media companies, online real estate platforms, etc. It is also a perfect solution for mobile users who always suffer the shortage of memory space for new applications. On top of all, Google Play Instant can be quite easy to create. Developers can simply transform a full app into an instant app by modularizing the app into separate code components. No need to create a new code branch.

If you want to create software in tandem with Instant-version, waste no time to contact us - Applikey Solutions! We’ll translate your idea into action in a fast, high-quality and cost-effective way. All you need is to discuss its specific details with our team. Submit a request right now!